ATTENTION TRAINEES: Please scroll down to the Facebook feed at the bottom of the page for daily training information.

About the Patriot Training Foundation

The Patriot Training Foundation is an all-volunteer 501(C)(3) nonprofit organization that provides a multitude of training subjects for law enforcement and military without cost.

Since in 2004, we’ve trained future and current military in leadership, fitness, weapons, combatives, medical, water confidence, land navigation and tactics. In 2014, we began offering our program to law enforcement departments. Our 563-acre facility an hour west of St. Louis provides unparalleled realistic training via multiple kinetic and critical decision-making ranges. Remote, moving targets and IR training gear further the value of our training. Our program is still provided without cost and is used by many of the tactical teams, ERT’s, SRU’s, snipers and individual officers that serve our region.

Our funding comes from patriotic individuals and corporations who agree that truly supporting a cause involves more than wearing a t-shirt or placing a sticker on a bumper.  We are proud to support the honorable people who wear a law enforcement or military uniform and selflessly serve our nation and community.

Since 2004, the Patriot Training Foundation has given young men and women a distinct advantage as they pursue an officer’s commission in the Armed Forces of the United States or enlist with a combat or lifesaving contract.  As a result, our trainees arrive ready to perform and lead at a very high level in an exceptionally competitive environment.  PTF provides training without cost in the areas of leadership, fitness, fieldcraft, marksmanship, medical and water competency.  These officers and enlisted personnel serve or have served in every branch of the military, including Special Operations units such as the 75th Ranger Regiment, Special Forces and SEALs. We also provide contracted training to the Special Operations community.

Over the course of the last year, our trainees have earned numerous Cadet/Midshipmen of the Month and Semester awards, Honor Graduate Awards, first choices of jobs and duty stations after graduation, successful completion of the selection process for the special operations community and Cadet Steis earned the Navy Federal Credit Union’s National AFROTC Cadet of the Year award.  During and after their service ends, they enter the community as true leaders and mentor the new generation of PTF trainees.

Since 2014, the Patriot Training Foundation has provided support to local, state and federal law enforcement departments.  Our 563-acre training facility is exceptionally suited to allow for large scale movements and a multitude of scenario-based training.

In a recent 10-day period, PTF hosted more than 200 officers from five departments.

Two of PTF’s courses are POST certified which counts toward annual required training.

PTF often supplies or supplements ammunition for departments that cannot acquire or afford to provide it.

In some cases, PTF provides training that has been lost to budget shortfalls or reallocation. 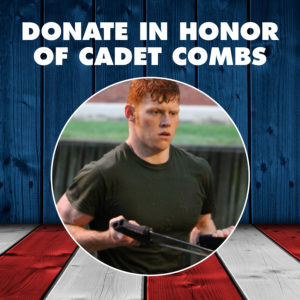 As many of you know, our son Jacques Combs is a Class of 2024 Cadet at the United States Military Academy-West Point.  He has pursued his dream of attending West Point since he was a sophomore at De Smet Jesuit High School.  Once he was accepted, the real work of training for the rigors of a military academy began.  Fortunately for Jacques and many others in the St. Louis area, he has the privilege to be a part of the Patriot Training Foundation.

Since 2004, the Patriot Training Foundation (formerly the Saint Louis Military Officer Support Foundation) is an all-volunteer 501(C)(3) organization that provides leadership, fitness, weapons, combatives, medical, water confidence, land navigation and tactical training without cost to those from the Greater Saint Louis area who pursue a commissioned as an officer in the Armed Forces of the United States or enlist with a combat or lifesaving contract.   PTF also offers this program to federal, state and local law enforcement tactical teams and officers at their 550-acre Warrior Training Facility in Warrenton, MO.  Their mission with law enforcement has become more critical than ever given the current unrest and campaign to defund or disband law enforcement departments and units.  In some cases, PTF provides the only firearms training local police departments get due to a lack of funding and resources.

Because of Patriot Training Foundation, when Jacques reported to West Point, he was fully prepared.  He was in top physical condition because of the strength and conditioning training.  He could safely and effectively handle his firearm.  He had a thorough knowledge of land navigation, water confidence and military protocols.  But most of all, Jacques has a community to support him in his quest to serve his country and fight for the freedom we all enjoy.

The foundation usually has several fundraising events and training contracts; however, due to COVID-19 those efforts have come to a halt.  My wife Wendy & I have initiated the mission to raise $10,000 to ensure the Patriot Training Foundation can continue to train the young people in our area that have chosen a life of military service and those in law enforcement so they are optimally prepared to defend our nation and communities.

We are asking for your help and your financial support.  It is easy to donate! Simply click here to donate.  Donations online can be from $25 – $5000 and they are tax deductible.  We greatly appreciate your support for our future warriors and law enforcement officers.

Patriot Training Foundation (formerly Saint Louis Military Officer Support Foundation) was proud to be a part of Flags of Valor, the display of 7,000+ flags on Art Hill in Forest Park, St. Louis, MO in 2016 to commemorate the 15th anniversary of 09•11•01. The flags were displayed from September 6-11, 2016 and each flag was personalized with a dog tag and photograph of a soldier, sailor, airman or Marine who lost their life in the War on Terror since 9•11•01.